Why Beekeeping Is an Efficient Industry

Why Beekeeping Is an Efficient Industry

The sun temple built by pharaoh Nyuserre in the Fifth Dynasty of ancient Egypt 4,500 years ago has the earliest known depiction of beekeeping. But remnants of beeswax in pottery fragments from 9,000 years ago in Turkey suggest that beekeeping has an even longer history going back to the very start of agriculture.

Beekeeping is a huge industry, thanks to the role that honeybees play not only as crop pollinators but also in their production of honey and other products, like beeswax. (Image: Olha Solodenko/Shutterstock)

It’s not hard to imagine why ancient people would want to keep bees around. Honey was one of the only available sweeteners in the ancient Near East. Beeswax also had medicinal and practical uses, for example as parts of tools and as a waterproofing agent.

Also, as modern beekeepers know, bees are relatively easy to work with. Unlike many other stinging insects, the European honeybee, Apis mellifera, is relatively reluctant to sting. That’s especially true when a bee fills up with honey, which honeybees do instinctively when they smell smoke.

While some have argued that this behavior comes from the bees’ natural inclination to abandon their hives at the first sign of a wildfire, Cornell University bee biologist Tom Seeley believes it may be exactly the opposite—honeybees may engorge themselves with honey so that they can survive inside the hive for a long period of time after a wildfire, which could easily burn all of the flowering plants that they depend on for nectar.

Whatever the reason, beekeepers have always taken advantage of the fact that honeybees become docile at the smell of smoke.

This article comes directly from content in the video series Why Insects Matter: Earth’s Most Essential Species. Watch it now, on Wondrium.

The anatomical feature that allows honeybees to fill up on honey is the crop. The crop is the frontmost section of an insect’s gut that, in honeybees and some other insects, functions like an expandable sack. The crop is located in the abdomen and is surrounded by muscles that relax to allow it to fill with honey but can also contract if the bee wants to share honey with another member of its hive.

Bees also use their crop to fill up with nectar when visiting flowers, which they later regurgitate inside the hive and fan with their wings to reduce the water content through evaporation, turning it into honey.

So the crop is fundamental to the lifestyle of the honeybee and, by extension, to the role that honeybees have played throughout human history.

Bees are very good at locating flowers thanks to their acute visual abilities. Let’s take a closer look at one of the individual ommatidia that make up the compound eye of a honeybee.

An individual ommatidium is an elongated structure that tapers toward the base. At the top is the lens, which is made of two separate components. The outermost portion is the cornea, a clear, hexagonal structure. Below that is a crystalline cone, shaped like an upside-down pyramid.

A bee’s vision is also trichromatic like human vision, but the three colors that bees can see are different. Honeybees have photoreceptor cells attuned to green and blue as we do, but instead of red (which is a lower wavelength), bees have a third kind of photoreceptor cell that detects ultraviolet. 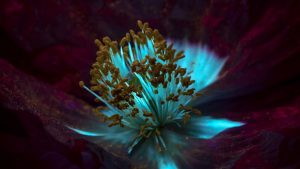 To see how bees view flowers, we have to view them under ultraviolet light. (Image: Immephotography/Shutterstock)

Because bees are important pollinators for many plant species, the flowers of many bee-pollinated plants evolved to have colors that bees can easily see. This is the reason why so many bee-pollinated flowers are purple, violet, or blue. Some plants also have flowers with ultraviolet colors, which bees can see but are invisible to our eyes.

To read the complete article go to;

Why Beekeeping Is an Efficient Industry (thegreatcoursesdaily.com)