I collect bee paraphernalia and two of my tokens prompted me to write these articles. The first token is a civil war token dated 1863, good at Tyler’s Beehive Dry Goods, 2 West Washington St., Indianapolis. The other token was good for one cent in trade at C.H. Pilger, Bee Hive Grocery, Norfolk, Neb. If the stores existed today, I would bet that they would be honored at their face value. What were Beehive stores? The ones that I have found don’t seem to be a chain store like Wal-Mart or K Mart, but there were/are a lot of buildings, businesses, and objects with the “Beehive” name.

Beehive Augusta Tavern constructed in 1769 has been a private residence, a general store, a pharmacy, an office for the ferry to Boudes Landing, and currently a tavern. In 1862 the building was set on fire (Civil War). After the flood of 1937 the building continued to deteriorate until in early 1970s, the Augustans saved it and other row houses by putting them on the National Registry of Historic Sites.

Sutton’s Beehive was built in 1854 and was once the Methodist Church, the Holbrook house, and the Sutton Center Apartments. This building was originally on a site on the west end of the Town Common. Eleven preachers served in the Methodist Church in different years until 1869 and the building was sold at auction to Stephen B. Holbrook who disassembled and moved it to the corner of Boston Road and Singletary Avenue in Sutton, Massachusetts. 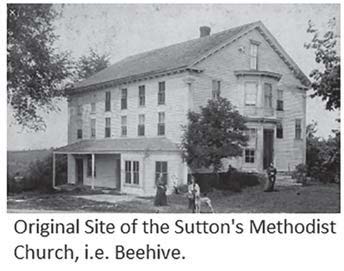 In the rebuilding it became a residence, an old fashioned store, and the Post Office was in the basement. Hot and cold water were plumbed throughout the house. Wilder S. Holbrook kept the store and Post Office in the building until 1888. The building sat on four and one quarter acres, but in 1908, one and six tenths of an acre was sold to the town of Sutton for a High School. The building was owned by Herbert Ray who moved the Grocery Store and Post Office to a Brick Building for about eleven years. 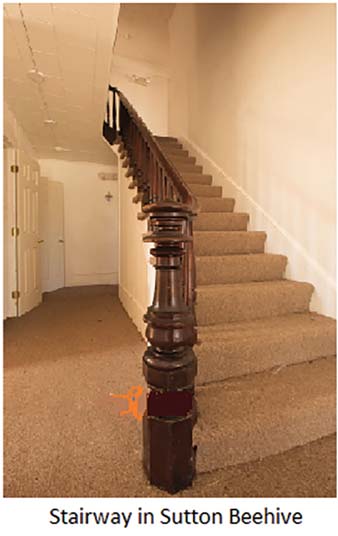 Then there was a succession of owners; Ernest P. Putnam, Wallace F. King, William H. Davis, John Hebert and Frank H. Paine in 1936. November 1945, Alfred and Barbara Beaton purchased the property and the top two floors were converted into four apartments and a four car garage was added. In 1946, the ground floor was converted into a grocery store and operated by George Grandchamp. In 1947, the store was replaced by two apartments and thus the six apartments became known as “The Beehive”. Many families occupied the Beehive and one of them, Howie Bottomly, recalls finding a grave stone under the floor in the stable/garage. It turned out that the stone was the old headstone that had been replaced. In the early 1990’s Getty Petroleum purchased the property and neglected it. This caused the tenants to leave. The building was demolished Thursday, April 2, 2020.

Tyler’s Dry Goods Bee Hive of Indianapolis, Indiana was established March 1861 on the corner of Washington and Meridian Streets. The store was 22 feet x 60 feet long. The next year 20 feet more were added to the length. In 1886 George M. Traver and C. Tyler Jr. were admitted as partners. The second floor was used for manufacturing and jobbing. In 1887 another 20 feet was added to the floor space making it 120’ in length. The basement of 22’ wide x 80’ long was an apartment. 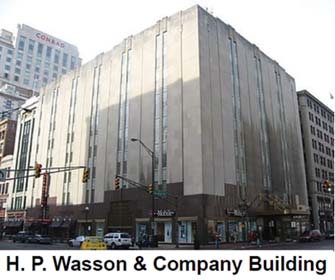 There were 15 salesmen and five cash boys. In 1861, the sales were $860,000 and in 1868 the sales were approximately ½ million dollars. Hiram P. Wasson started out as a stock boy. Wasson acquired an ownership interest in the Bee Hive Department Store in 1874. In 1883, Wasson moved it down the street with a new name, H.P. Wasson and Company. Hiram Wasson died July 21, 1910 and his son, Kenard died in 1912. Thus the store was sold to Gustave A. Efroymson and his brother-in-law Louis P. Wolf. Louis Wolf was killed in a plane crash in Alaska in August 1967. In October the stores were acquired by Goldblatts. Suffering heavy losses, all the stores were closed. The Kokomo store was the last to close February 27, 1981. After some renovations in 1980’s of the original store, became the home to the State Department of Health.

The Bee Hive near Sioux City, Iowa opened in 1884 and was run by Dave Davidson. Dave’s brother, Ben, then ran this store while Dave opened up another store in Sioux Falls, South Dakota. The South Dakota store was situated on the west side of Phillips Avenue, between 9th and 10th Street. It opened on May 1, 1886 and was a dry goods store as it sold carpets, clothing, boots, and shoes. The two stores were approximately 75 miles apart. In April 1893, the South Dakota Bee Hive was sold to Herman C. Freese and Charles M. Rhode. Additions were made to the store in 1904, 1910, and 1924. Rhode died shortly after a heart attack in 1930. Freese carried on a few years, but sold the store to Fantle’s before he died in 1936. The final days of the Bee Hive, it was a four-story building with a restaurant, hair salon, and many departments. Montgomery Ward opened its first store at the old Bee Hive location in 1935. Dave Davidson shocked those that knew him by committing suicide on January 15, 1931.

Waiuka Beehive Store, New Zealand started September 1905. It was run by Stephen Perrin, who opened it in the Flexman Building on the corner of Bowen and Queen Streets. 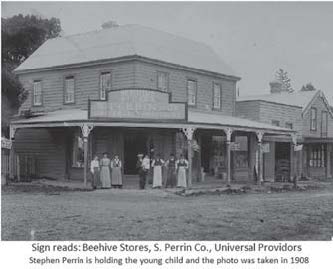 Bad luck seemed to follow Perrin, for about a year after the store opened, he was in a bus accident where the horse drawn bus went over an embankment between Waipipi and Waiuku. He was badly bruised and thought that he would be confined to his bed for some time. Perrin declared bankruptcy in 1910 but just before his trial, he fell off a train carriage platform. He later closed the store.

Beehive Wool Shop, Victoria BC was founded in 1906 by the Fowler family. They started by selling yarn and fabric and the woolen underwear was proudly displayed suspended from the ceiling. The store moved locations several times before settling on Fort Street where it remained for several decades. In the 1950s, the Orme family purchased the store and the specialty became British Woolen Yarns and Fabric. 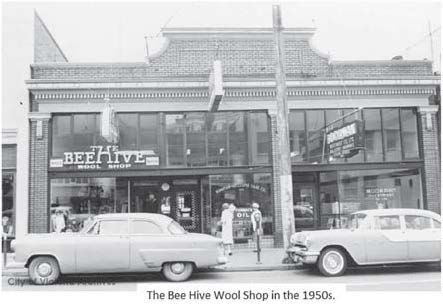 In the 1970s, knitting had a big renaissance and the “Condo Sweater” craze began. This prompted the opening of the Beehive Store at Hillside Mall, Mayfair Mall, and on Oak Bay Avenue. By 1995 the multiple store locations had been combined into the Oak Bay Avenue location. In March 1997, Valerie Huggett bought the Beehive. In 1999, the Beehive was moved back downtown to 1700 Douglas Street, just a few blocks away from its original location. In 2018, Valerie’s daughter Julia joined the team, making it a family ownership tradition again.

The C.H. Pilger Bee Hive Grocery, Norfolk, Nebraska trade token did not have a date, so my research really began. There were three grocery stores and two newspapers in early Norfolk, but no names of the businesses were given in the documents. The village of Norfolk was settled in 1866. Did you know that Norfolk is the contraction for the words North Fork and the original abbreviation offered was Norfork, but the postal authorities thought that it was a spelling error and changed it to Norfolk? The Nebraskans still pronounce it Norfork.

Living in Norfolk must have been a chore as they had a record of 66 years of floods in Stanton County from 1823-1940 in the Elkhorn Basin. They had three major floods and 17 minor floods. The floods that would have affected Charles Pilger were the March 27–29 to early April 1912 where they had 76 inches of snow melting, the snow and rains of 1917 that caused two floods that year, and the April 20-26, 1920 flood. In 1924, the Sanitary District began to make improvements at Norfolk but Charles Pilger may have moved by then. The floods also weakened the bridges so people would to have walk across, rather than drive over the river.

Just 22 miles due east of Norfolk is a town, Pilger, Nebraska. It was incorporated in 1887 and named after Peter Pilger. They had two beehive stores in Pilger, one store at 155 W 1st Street and the original Bee Hive store at 405 W 1st Street. On June 16th and 17th of 2014, twin tornadoes (both EF-4’s) came through Pilger and damaged most of the town. The older Beehive convenient store is pictured, after the tornado.

The Bee Hive Grocery in Omaha was run by David and Mary Bernstien. I thought for a moment that it may have been the C.H. Pilger store as it said that the store had been started by his great uncle. The Burnstein store was located at 822 N. 16th Street and started in 1913 however the date was wrong for the Pilger store. There was a list of 1000 defunct grocery stores in the Omaha area, two of which were Bee Hive stores. One was the Bee Hive Grocery Store at 2421 N. 24th Street which was in operation from 1902 – 1998. 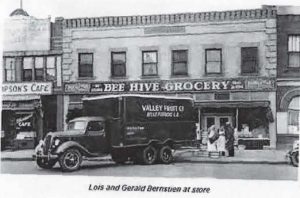 The other was the Burnstien Bee Hive Grocery Store that was in operation from 1904 – 1999. David Wolf Burnstien, Mary Reva Bernstien (Fried), children: Gerald and Donna have passed away and their grand children: Mark and Ronald had other pursuits. So Bruce was the one to continue the store until his death in 1999.