How do honey bees digest pollen?

Pollen supplies critical nutrients to many animals, including honey bees (Wright et al. 2018) and other bee species (Leach and Drummond 2018). Pollen is rich in protein, free amino acids, lipids, vitamins, and inorganic elements, all of which are found at much lower levels in honey bees’ other food source floral nectar (Brodschneider and Crailsheim 2010; Nicolson 2011). Pollen grains contain only a few cells which are protected by an inner layer (intine) and a very tough outer layer (exine). These grains are dehydrated, made metabolically inactive for dispersal, and are known for their near indestructibility (Borg and Twell 2013). So how pollen-eating, or palynivorous, animals digest pollen has been a long-standing mystery. Before we get into pollen digestion, let’s review pollen biology. Bees pollinating flowers transfer pollen from one flower to another (Figure 1). In order to fertilize new flowers, pollen grains produced by the anther / stamen of a male flower must first interact with a compatible stigma on a female flower. Then, the pollen grain initiates a process called germination resulting in the formation of a structure known as the pollen tube, which grows down the length of the style, descending from the stigma on a female flower. Upon reaching the ovule, the site of egg production in a female flower, the pollen tube ruptures, allowing for the joining of the male and female gametes, which completes the process of fertilization and therefore pollination (Borg and Twell 2013). 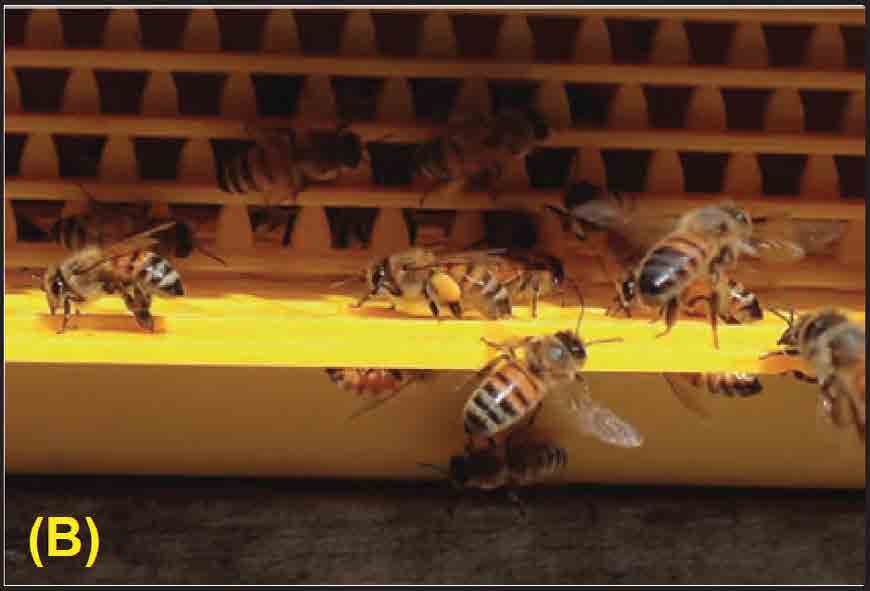 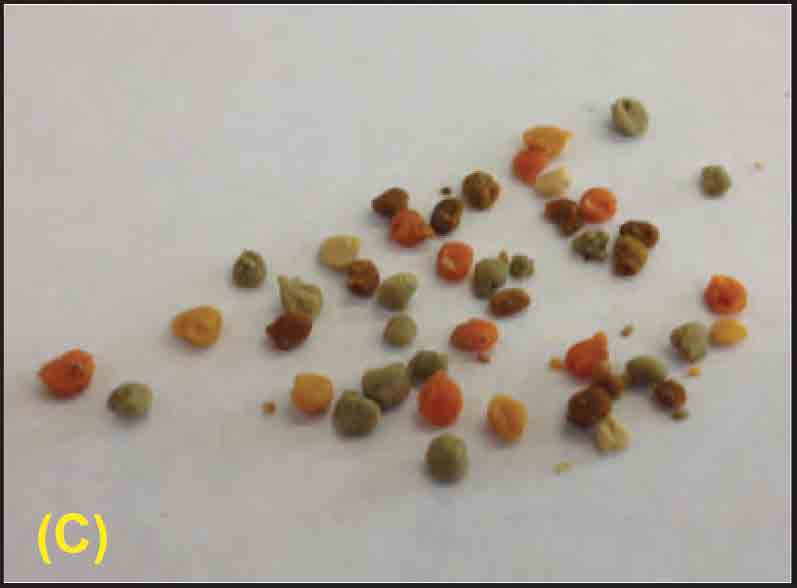 Figure 1
(A) Forager working white clover (Trifolium repens).
(B) Forgaers on an anatomic front-mount pollen trap with visible pollen loads.
(C) Pollen pellets collected from the corbiculae of foragers returning to the colony.

Currently, pollen digestion is thought to involve one or several of the following mechanisms: induction of partial germination (pseudogermination), mechanical disruption of the pollen wall, enzymatic breakdown, and osmotic shock (Roulston and Cane 2000). In bees, including honey bees, pseudogermination and osmotic shock are the most likely routes for pollen digestion (reviewed in (Peng and Dobson 1997; McKinstry et al. 2020)). Osmotic shock occurs when the changes in osmotic pressures in different regions of the digestive tract cause the pollen grain to burst as it travels. Most studies looking at bee digestive tracts suggest that pollen contents are slowly released as the grains travel. So, while osmotic pressure changes may influence release, the gradual leakage of pollen contents argues against a dramatic rupture. For example, Peng and colleagues (1986) found that there was not an immediate rupture of alfalfa pollen after transition from the crop (also known as the foregut and similar to a stomach) to the midgut even though that transition involves a significant change in the osmotic environment. They instead observed slow changes in the pollen grains including a slow swelling around the germination pores where the pollen tube would emerge, followed by the release of internal material (Peng et al. 1986) (for a picture of pollen grains in a honey bee digestive tract see Figure 2). The authors suggested that these changes were much more consistent with a pseudogermination mode of digestion, which occurs when pollen grains initiate but do not complete a germination sequence. They proposed pseudogermination as opposed to full germination because it’s been known since the mid-1900s that honey bee-collected pollen has reduced capacity to pollinate female flowers, in part due to loss of germination potential. One of the earliest reports on this topic showed a loss of this potential after only a few hours (Singh and Boynton 1949). This has interesting implications for bee-mediated pollination, because it suggests that bee-collected pollen may be good for pollination when they are out in the field, but that bees may alter the pollen in a way that reduces its pollination efficiency perhaps while increasing its ability to be stored. For pseudogermination to be a possible digestion mechanism, pollen grains must retain the capacity to at least initiate the germination process. The Singh and Boynton study (and others like it) have demonstrated loss of germination potential by measuring pollen tube formation or fertilization potential, both of which are late events in the germination process. During germination, a number of early biochemical events occur in pollen grains before the dramatic morphological changes are observed, such as pollen tube formation. A pseudogermination mechanism of digestion would require that some aspects of germination, such as metabolic activity, remain intact despite the loss of the ability to complete the process. However, these events have been hard to measure leading to a gap in the evidence supporting pseudogermination as a mechanism for pollen digestion. 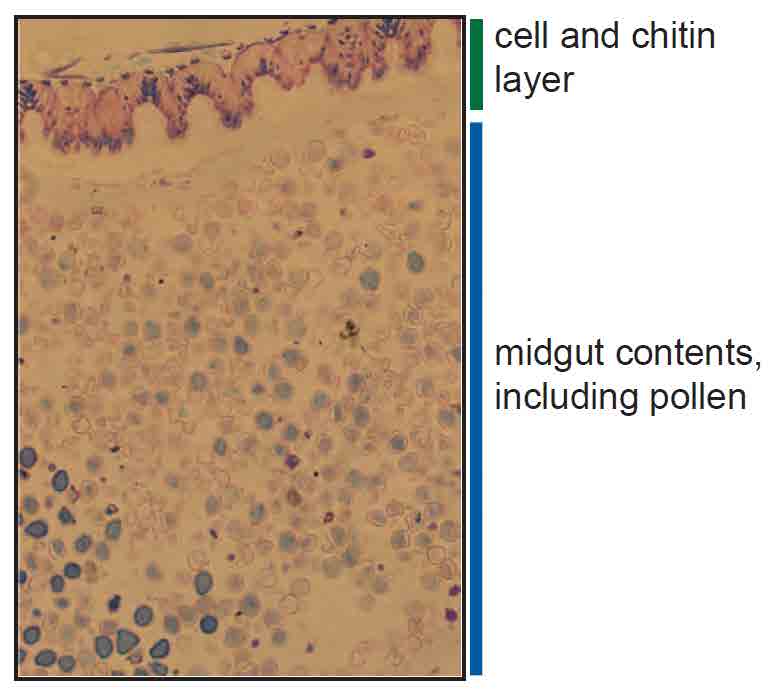 Figure 2
Hematoxilin and Eosin stained sections of honey bee midgut tissue reveal pollen in various stages of digestion inside the lumen. The cell and chitin layerlining the digestive tract is at the top.

New methods provide evidence that honey bee-collected pollen still retains the ability to ‘activate’ even if it can’t fully germinate.

Luckily, a number of recent advances in our understanding of the cellular and molecular steps involved early in the process of germination may provide new ways to demonstrate the ability of honey bee-collected pollen to partially germinate. For example, pollen germination has been shown to result in the production of an early ‘wave’ of Reactive Oxygen Species (ROS), which is a common biproduct of metabolic activity that is also important for pollen function (reviewed in (McInnis et al. 2006)). In a recent study from my lab, we proposed that a burst of ROS in honey bee-collected pollen could provide additional evidence of retained metabolic activity and a potential pseudogermination mechanism operating during honey bee pollen digestion. We used a number of microscopy techniques and biochemical assays to show that pollen loads gathered by honey bee foragers could produce ROS (McKinstry et al. 2020). We first collected pollen pellets from the pollen baskets (corbiculae) of the back legs of foragers returning to the colony or from a pollen trap (Figure 1). We then rehydrated them to allow germination and found robust ROS signals in pollen pellets using two biochemical assays that detect two different forms of ROS, either hydrogen peroxide (H2O2) or superoxide anion. In Figure 3, we show results from the assay detecting hydrogen peroxide from a pollen load that we then used DNA sequencing to identify as being from flowers of white clover (Trifolium repens). In the case of the hydrogen peroxide assay, we further showed that the signal could be eliminated through various treatments. For example, treating the pollen with heat reduced the amount of ROS produced, demonstrating that the signal is dependent on active enzymes in living pollen. Other experimental manipulations are described in detail in McKinstry et al. (2020). Using a fluorescent dye that allows visualization of various types of ROS, we also showed that the signal was localized to pollen grains. These assays demonstrate that pollen collected from honey bee corbiculae possesses the ability to produce ROS upon rehydration.

Figure 3 (A) Results of Amplex Red Assay showing amount of hydrogen peroxide produced by white clover pollen after rehydration. Data shows μM H2O2 produced per minute represented as mean ± Standard Error of the mean **p<0.01 (B) Schematic showing how ROS produced upon germination can be inhibited by a number of conditions (further details in (McKinstry et al. 2020)).

It was important to show that pollen grains could produce ROS inside the honey bee digestive tract where the pseudogermination must occur to be involved in digestion. We collected foragers from the colony, dissected their digestive tracts, and removed the food bolus, a chitin-coated sac containing consumed pollen. Using these food boli and the biochemical method that detects hydrogen peroxide, we found a robust signal of ROS in the digestive tract of individual bees. Then, using the dye that allows visualization of ROS, we again observed that the signal was often present in structures that appeared to be pollen grains (Figure 4, page 71). Finally, we fed bees that had been deprived of pollen for 24 hours either sucrose syrup alone or sucrose syrup supplemented with fresh pollen for one hour. We observed increased ROS levels (and increased pollen counts) in bees fed sucrose syrup with pollen compared to those receiving sucrose syrup alone for the same time period. These results supported the idea that pollen could also produce ROS in the digestive tract of bees during the digestion process.

Most studies of germination potential post-collection have focused on pollen tube formation or fertilization potential (Roulston and Cane 2000). As these are late events in the germination process, we sought to focus on metabolic activity associated with early germination processes to provide support for a pseudogermination method of pollen digestion in honey bees. Our results are consistent with earlier studies that found that bee-collected pollen showed a significant increase in oxygen uptake upon rehydration (Keularts and Linskens 1968; Verhoef and Hoekstra 2012), supporting retained metabolic activity despite absence of pollen tube formation. There are a number of important questions left unanswered by our study. We observed highly variable levels of ROS production by pollen from different plant species and even differences in the levels of ROS in pollen from the same species. Understanding how experimental limitations and differences in the biology of different plant species might contribute to this variability will be important to disentangle. Also, the pollen-derived ROS we observed could have effects on the biology of the digestive tract in the honey bee by impacting the health of the midgut itself or the microbiome contained within it.

Despite these remaining questions, the evidence of retained metabolic activity in our study provides additional support for a mechanism of pollen digestion that includes pseudogermination in honey bees, and points to novel approaches for better understanding of pollen digestion in this species and other palynivorous insects. Further research will still be needed to determine whether pseudogermination is required for pollen digestion and whether osmotic shock plays a role in the process, with important consequences for understanding honey bee nutrition. 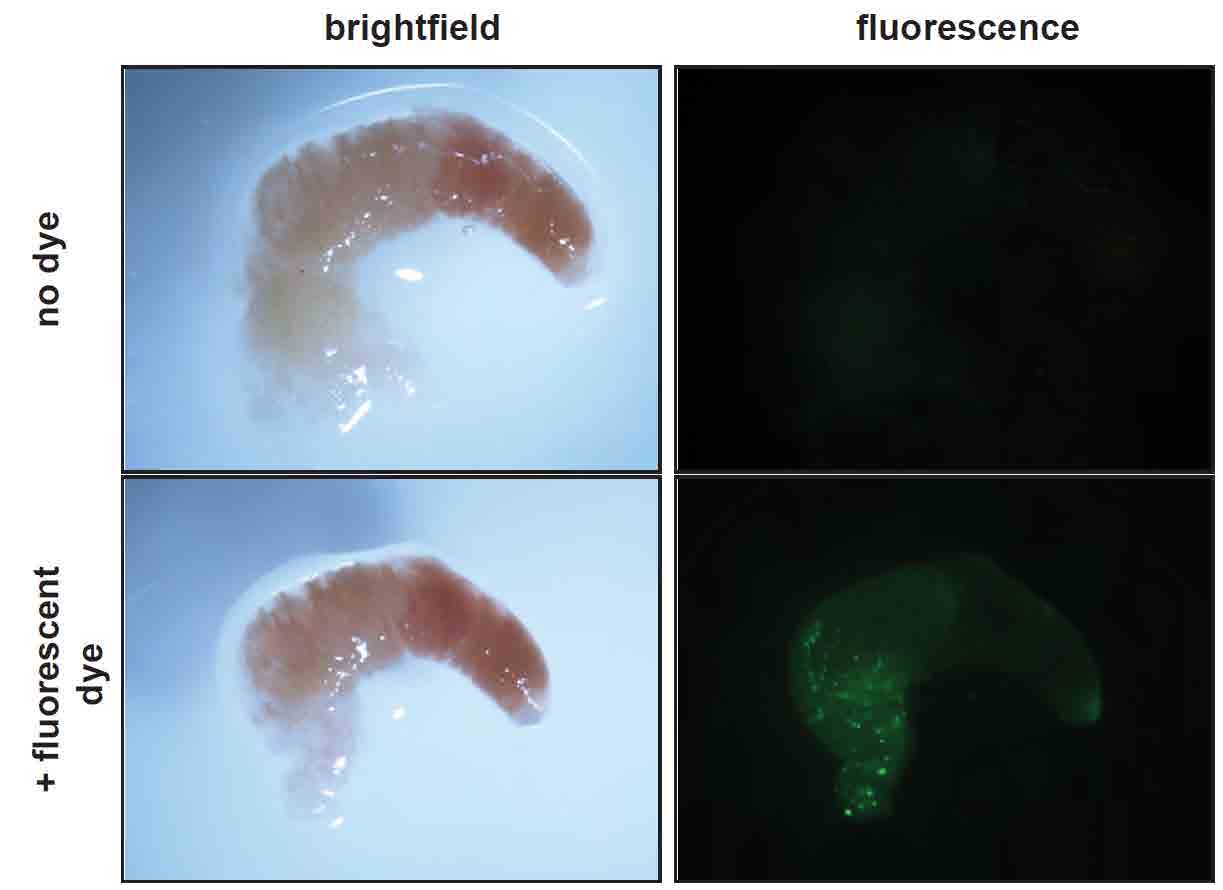