By: Roger A. Moore and Dave Wick

In this article we present a case study regarding an Apis mellifera honey bee colony with a heavy Varroa destructor mite infestation. When separated from the honey bees, these mites were examined using the integrated viral detection system (IVDS)1,2 and found to be actively infected by an unidentified virus. Interestingly, this virus was not found at all in the honey bees that were heavily infested with the mites. This raises the intriguing possibility that the honey bees may have acquired natural immunity to this particular virus while the mites remained susceptible. Such a virus may hold promise for the treatment of mite-infested bee colonies if it were shown to impact mites significantly without harming the bees. If so, this could represent a strategic avenue for treating mite infestations that merits further study.
The Varroa destructor mite is considered by many beekeepers to be the most problematic honey bee pest ever encountered3. These parasitic mites spend their entire life cycle with honey bee hosts. Female adult Varroa mites feed off of the fat of mature honey bees, causing stress, tissue damage and susceptibility to pathogens4. They reproduce on the honey bee brood and explode in population under suitable conditions. Female mites are highly mobile, crawling around the honey bee combs and in between adult bees (Figure 1). This mobility optimizes the mite’s capacity to act as a reservoir for any viruses that may be present. In many cases, the viruses can be dangerous pathogens. Deformed wing virus for example, prevents bees from flying properly. Not all viruses carried by the mites are equally as damaging to a bee colony. An additional possibility exists that there is a certain subset of viruses that are harmless to the honey bees but highly specific mite pathogens. Here we describe a case study in which we evaluate this possibility.

The mite-infested bees described in this report came from the midwestern United States. The colony was in route to almond pollination in California and were having trouble making the six to eight frame grade. The problem was getting progressively worse. The beekeeper requested help from BVS, Inc. with additional investigation regarding this colony. Upon conducting our standard bee examination, the nosema fungal spore count was found to be negative and the average weight measurement was in the normal range of 0.12 grams per bee. Analysis for the presence of Varroa destructor mites revealed an infestation of 25 mites per 100 bees.
The first goal was to detect any viruses carried by either the honey bees or the mites. Frozen bees infested with mites were physically separated from one another and manually counted. The integrated viral detection system (IVDS) was used to examine each sample separately. The IVDS method1,2 involves enriching and concentrating viruses from biological samples according to their unique physical properties and then detecting those viral particles using an electrospray ionization-differential mobility analysis (ESI-DMA) approach. The IVDS strategy was developed and patented1 by the United States Army in order to detect and quantify all types of viruses and virus-like particles2. The goal was to isolate virus particles based upon their physical properties rather than rely upon chemical reactions. This strategy has proven to be effective over many years and is becoming even more practical in the current environment of supply chain disruptions and price inflation. Once virus particles are detected based upon their movement through an air flow and isolated according to their unique sizes, they are then quantified with a condensation particle counter. Our analysis revealed no significant presence of viral or viral-like particles in this colony of honey bees (Figure 2). 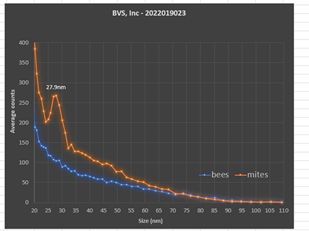 We then analyzed 10 mites that were separated from the bees and prepared them for analysis in the same way as the bee samples were prepared. Analysis of the mites was done immediately after physically separating them from the bees. The mite tissue was processed using much lower quantities relative to the honey bee’s due to their lower biological mass. Therefore, we were concerned about difficulties with limits of detection for comparison purposes in the mites. However, we found the opposite. A very large peak detection was observed in the mite sample with no corresponding peak found in the bee tissue (Figure 2). Thus, it was likely that the difficulties suffered by this colony resulted primarily from the physical stress and tissue damage caused by the heavy mite infestation rather than from an active viral infection. Remaining mites associated with this colony are still available for study.
The implication of our observation is that an identified virus could conceivably be specific to the parasite and harmless to the host. Such a finding could point towards a treatment strategy for mitigating or even eliminating Varroa destructor infestations from Apis mellifera colonies. The idea of achieving biological pest control with pest-specific pathogens that are harmless to the surrounding environment is not a new idea5. Scientists at the Tamil Nadu Agricultural University in India have used the Nuclear Polyhedrosis Virus (NPV) with some success to mitigate American bollworm, the tobacco cutworm and the red hairy caterpillar that attacks groundnut crops6. Likewise, NPV has been used to combat western tent caterpillars, African armyworms and invasive gypsy moths7. It has been proposed that the Southern pine bark beetle in Mississippi could be mitigated using a biological control method based upon naturally occurring viruses8. In the Czech Republic, the pine bark beetle Ips typographus was treated with the entomopox virus with some success9.
The aforementioned studies do not represent an exhaustive review of the field, yet it is clear that this approach has barely been explored. More research on this potential mitigation strategy is certainly warranted. Biological pests have natural enemies that are already part of the environment, and it may be possible to use them to our advantage. Such an approach could be part of an integrated pest management system and provide a complimentary method to help eradicate mite infestations. Our goals are directed primarily towards the detection, identification and characterization of naturally occurring viruses. We do not propose to genetically engineer those viruses in any way, given the history of unintended consequences with this approach.
We have already taken a large step forward by detecting a naturally occurring virus that clearly infects the infamous Varroa mite at high concentrations, apparently without infecting the honey bee host. We highlight that the IVDS approach is a valuable part of the toolkit for the discovery process. It requires measurement of an actual viral particle rather than detection of genetic sequence that may or may not represent an active infection. Importantly, a viral detection can be made without having to know the identity of the virus prior to looking for it.
Further steps would be to isolate the virus so that it could be sequenced. After that, the development of a mass spectrometry and PCR detection method specific to this virus could be developed. More studies are also needed to evaluate host specificity and any symptomology associated with viral infection.