HOW TO CATCH A GIANT SWARM

HOW TO CATCH A GIANT SWARM

Swarm size varies dramatically. Some massive clusters are the equivalent of several watermelons while others are barely grapefruit-sized. These size differences may seem arbitrary, but when a swarm is exceptionally large or small they may need special care. Read on for part one of this topic to find out what you need to know about catching especially large swarms and stay tuned for part two where you’ll learn what you need to know about catching small ones.

When my phone lights up with a swarm rescue request and the image of a big, glorious cluster of bees appears on the screen, I can’t help it—my eyes go wide and I let out a giddy squeal before feverishly typing that, ‘Yes, I can come right now’. A sizable swarm of bees is an exciting opportunity for a beekeeper not only because they have a better chance of survival, but because they build up quickly. If it’s early in the season they may even store a surplus of honey. The more bees a swarm has, the faster they can accomplish what they need to do to survive. In short, a big swarm is valuable.

There are a few behavior patterns I have observed with larger swarms that are helpful to know about ahead of time.

First and most important, they are more likely to abscond. This means that after you catch them, there’s a good chance they will leave. I suspect this is because big swarms have more resources to spend. Every bee in the swarm is full of honey so, they can afford to be picky about where they live. For this reason, I always give them a frame of open brood from another colony. I do this either at the time of the catch (I bring the brood with me) or first thing in morning (after having moved them to my apiary at night). Read more tips on how to keep swarms from leaving here.

On a related note, large swarms need more room! Don’t try to cram a massive swarm into a nuc box. Even if they fit into a single box, I often add a second one immediately so they feel they have ample room to grow. I have found that when I do not do this, they are more likely to abscond. Plus, as I’ve already mentioned, these giant swarms can build out comb at an amazing rate. Don’t be surprised if they draw out and entire box and are into a second one after just a few weeks.

Another possible trait is defensiveness. Even though swarms are generally docile, in my experience, large swarms are more likely to be feisty. This is especially true if you are in an Africanized honey bee zone. So, definitely suit up just in case.

Lastly, a large swarm is more likely to have more than one queen. Typically, I find this out after I catch them when one half of the swarm leaves. They cluster somewhere else in my apiary or disappears altogether, leaving a much smaller colony than what I caught in the hive. On other occasions I can tell the swarm has multiple queens because it has a kind of jittery energy that makes them difficult to catch. In my book, Queenspotting, I write about the biggest, wildest swarm I’ve ever encountered. It contained at least 20 queens and I did not succeed in catching it even after 4 hours of effort. They simply could not get organized enough to settle and would continuously leave the hive box.

Coincidentally, the day after I wrote the draft for this article I received a text from a beekeeping student that contained a photo of the second largest swarm I have ever seen! I suspected it has multiple queens and sure enough it did.

By the time I got there, it had split into two. One half went underneath a rooftop swarm trap the beekeeper had set up and the other half remained in the tree. The rooftop half contained at least 3 queens, 2 of which were actively being balled and looked in rough shape. They were almost hairless, had torn wings and damaged legs.

The tree half had the characteristic jittery, unsettled appearance that swarms with multiple queens often have. They became very agitated when we first began to move them to the box. Unfortunately, we did not find any quees, but I suspect there was at least one because at one point while scooping the bees into the box, the sound suddenly changed and the bees became calmer.

Here’s hoping you get the chance to catch your own massive swarm some day. If, you’ve already been lucky enough to do so, share your experiences and observations with these colossal clusters in the comments. 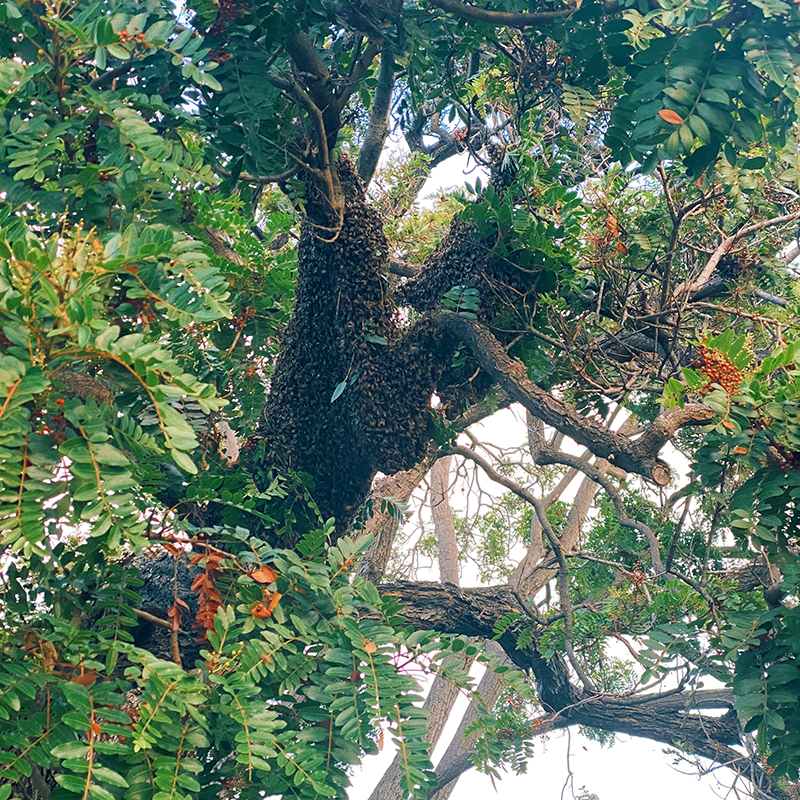 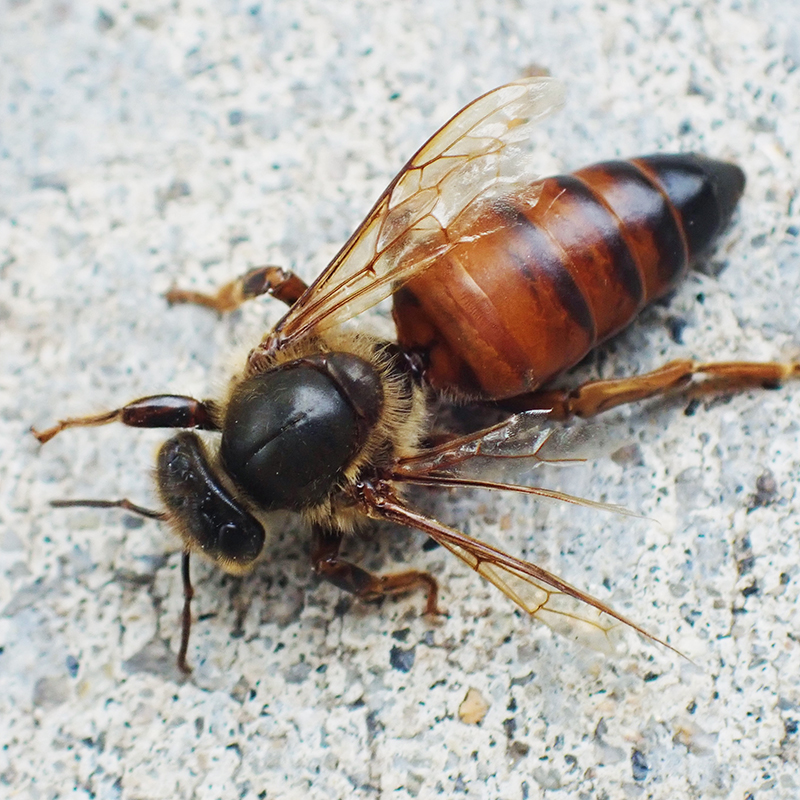